Shelakh Lekha (Bamidbar/Numbers 13:1 - 15:41)
In Jewish liturgy, the Torah is divided into weekly portions, to be read sequentially throughout the year, beginning and ending on the holiday of Simkhat Torah. Which is to say, on Simkhat Torah we read the last verses of Devarim/Deuteronomy, and then the beginning verses of Beraysheet/Genesis. We then proceed to read the Torah in order over the course of the year, a Portion each week. Portions vary in length, but are usually between 2 and 5 chapters.

This week we read the portion Shelakh Lekha.


Torah as a collection of documents:
The Torah is much more than a long narrative. It is a collection of many kinds of documents. Even the midrash (Canonical Rabbinic exegetical literature) acknowledges this:
Shemot Rabbah 5:22 explains that the Hebrew slaves had in their possession various scrolls, relating the incidents of the book of Beraysheet (Genesis), which they would enjoy reading during their rest every Shabbat.


Torah was written with acute attention to literary forms and styles:
Here are some motable literary details:

13:18 - “look at the land, what it is like.” Why the 2nd phrase? Literally: compare it to other places you’ve seen. Is it like Egypt or the wilderness?
13:22 - Hebron. Yet no mention of Machpelah, the burial place of the patriarchs and matriarchs. The 2 places are certainly connected, both early in Torah (Khiya Sarah) and in the midrash.
13:26-27 - “...came to Moshe and to Aaron and to the community.... They told him...” plural-singular conflict?
13:33 - “and so were we in their eyes.” Classic psychological projection. Indeed the opposite is true as we learn elsewhere, including directly from the Haftarah: the land was consumed with fear of the Israelites.
14:4 - After last week’s rebellion by Aaron and Miriam, now the community plots to replace/overthrow Moshe. He sways them, but next week, rebellion is the main narrative. Subtle hints of building discontent against Moshe.
14:18 - In Exodus, Moses discovers those attributes to be that God is "compassionate and gracious, slow to anger, abounding in kindness and faithfulness, extending kindness to the thousandth generation, forgiving iniquity, transgression, and sin; yet God does not remit all punishment, but visits the iniquity of parents upon children and children's children, upon the third and fourth generations" (Exodus 34:6-7). But in Sh'lach L'cha, Moses reorders God's attributes as "slow to anger and abounding in kindness; forgiving iniquity and transgression; yet not remitting all punishment, but visiting the iniquity of fathers upon children, upon the third and fourth generations" (Numbers 14:18). In so doing, Moses leaves out seven of God's attributes, including compassion, graciousness, and forgiving of sin. In addition, he begins with "slow to anger."

“the manna” is spelled exactly as “Haman.”


SMB Commentary:
As 10 of the 12 scouts were selected poorly, so very often in Jewish history, those we have chosen to represent us, do so poorly, setting their own interests and personalities as the standard for the community and its needs. This is particularly true when we select “notables” such as the rich and famous to represent us.

“Assembly! One law for you and for the sojourner that takes-up-sojourn, a law for the ages, throughout your generations: as (it is for) you, so will it be (for) the sojourner before the presence of YHVH....” (Numbers 15:15, Everett Fox trans.)
This is the foundational difference between paganism and the Judaic vision of One God. It is not the worship of idols, per se, that is wrong or evil. The part points to the Whole, so idol worship is merely an indirect means of worshiping the One. Rather, it is the fragmentation of the Whole that then justifies the establishment of “insider” and “outsider” values and laws. All forms of oppression are the direct result of having 2 or more classes of law based on group status (inside/outside, us/them, powerful/weak). Paganism is not about believing rocks and trees are God; few pagans were so deluded. Paganism is about holding to dual standards, and therefore it is as relevant (and prevalent) an evil today as in the time of Avraham and Moshe.

The rebellion(s) against God teach us that it is inherent in human nature to resist, as well as desire to follow the Divine Will. Our resistance/rebellion is a defining feature of relationship to God, and the course of that struggle determines the depth and value of our spiritual search and the extent of our holiness.
Posted by Unknown at 8:24 PM No comments:

Email ThisBlogThis!Share to TwitterShare to FacebookShare to Pinterest
Labels: drashot

NGO’s, the EU, and anti-Zionism

Israel is arguably the most vilified country in the world. This is no coincidence. Before the establishment of Israel, Jews were the most vilified people in the world! Anti-Zionism is simply a modern continuation of this long-standing form of bigotry. Jew hatred is much more than a religious issue. It is equally political, social, economic, and cultural. Anti-Zionism may have religious threads woven into it, but it is primarily a political cloak to Jew-hatred. Israel is vilified because it is a Jewish nation, not because of its policies and behaviors. This does NOT mean that Israel is above criticism. Far from it. Israel, like every nation, and every person, is deserving of plenty of criticism. But the hatred and vilification of Israel is of a different order.

To support that statement, consider the following:

The Israeli-Palestinian conflict has historically attracted extraordinary, and largely disproportionate, international attention. Not because of its ferocity: The number of Palestinians killed by Israelis (and vice versa) over the past six decades is probably smaller than the 9,000 Muslim Bosnians massacred in Srebrenica in July 1995 by their Serb and Croatian compatriots and decidedly smaller than the death toll from other conflicts throughout the globe that range in the hundreds of thousands if not millions.

Nor has this obsession been driven by humanitarian considerations. Not only is the Gaza Strip not in the throes of a deep crisis, but the humanitarian situation there is better than in some of the countries whose ships have been sent on occasion to break "the siege" of Gaza. Infant mortality in the Gaza Strip, for example, is 17.71 per thousand births compared to Turkey's 24.84 or the global average of 44; life expectancy in Turkey is 72.23 years whereas in Gaza it is 73.68, much higher than the global average of 66.12, not to mention such Arab or Islamic countries as Yemen (63.36), Sudan (52.52), or Somalia (50). Even by more advanced indicators, such as personal computer use or Internet access, Gazans are in a much better position than many of the world's inhabitants. In the words of the Slovenian philosopher Slavoj Zizek, no Israel-lover by any stretch of imagination, "an average Congolese citizen would probably have sold his mother into slavery to be able to move to the West Bank."

Those two paragraphs are the opening (but for 1 prior paragraph) of an insightful and well-researched article, NGOs vs. Israel, by Ben-Dror Yemini, the opinion-editor of the Israeli daily Maariv. The full article can be found at Middle East Quarterly, Spring 2011, pp. 67-71,
http://www.meforum.org/2919/ngos-vs-israel
This article is worthy of your careful attention, whether you have a general interest to be well informed about this conflict, or you want to deepen your understanding of the subtle but pervasive reach of Jew-hatred.
Posted by Unknown at 5:15 PM No comments:

Here are some details of the completed wall. The process took much longer than I expected; probably 30 hours or so. Had to work in small batches of mortar since placement of each brick was slow, occasionally needing more chisel work to fit the odd spaces. Totally fun. 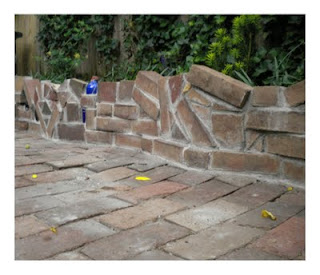 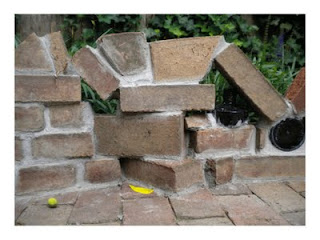 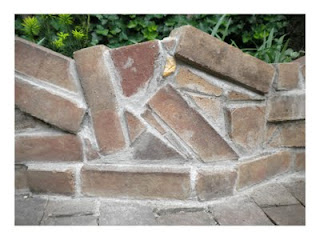 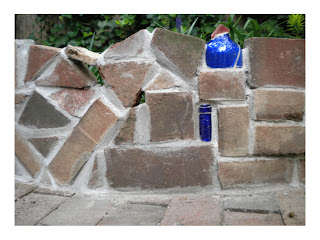 Posted by Unknown at 1:58 PM No comments: