I have been working on converting a travelogue I wrote in 1983 into an eBook. This is not simply a matter of conversion into xhtml from standard word processor format. An eBook should be more than simply an electronic version of a physical book.
In the case of my travelogue, Ottoman Beachcomber, this means embedding links into the text, to explicate places with public knowledge and images. It also means digitizing drawings from my notebooks, to embed in the story, as well as digitizing my wife's prodigious collection of 35mm slides, many from our travels in 1983, again to illustrate the text.
While I have not yet digitized the slides, the following excerpt will give you a taste of the many virtues of eBooks. Clicking on the link-colored text will take you to explanatory or illustrative internet resources. Of particular pleasure to me is the drawing I did of the Contemporary Art Gallery in Skopje, which you can see below. Compare that to a photo I found in Wikipedia of that very same gallery, the "Ottoman bath" link in my text, taken recently!
I hope you enjoy the short excerpt below as much as I have enjoyed researching the places and times described.
IV. SALONIKI, ALMOST
Gevgelija.
My intention was to go from Prizren to Skopje to Saloniki, a city 70 k's inside the Greek border. It would be a very long day unless my connections were good.
I woke at 5:41 to catch a 7:00 AM bus, and it was easily done. I reached Skopje by 10:00. However, there was no bus leaving for Saloniki till 2:30. I could get a direct bus at that time, but it would be four times as expensive as taking a bus (or train) to the border, walking across, and getting another bus in Greece. That's the way it works in these here parts. So I walked to the train station and found that the next train to the border was at 3:30. In spite of the hour delay, I decided on the train. I had been told it was more convenient. I checked my bags at the very modern Skopje train station (the old one had been shaken down in a 1961 earthquake), and set out to explore. A tourist map showed an art gallery, 300 year old mosque, and a caravanserai clustered fairly closely together and about a 20 minute walk from the train station. The district I was exploring also had a wonderful, large, open air market. It consisted of a number of picturesque winding alleys built into some Ottoman ruins, filled with an unending assortment of shops and goods. I especially noticed some antique jewelry shops with exceptionally fine old filigree work. In fact, I had never seen anything nicer, but then again, I'm not a regular at Sotheby's. I drank little glasses of tea in two tiny, wood panelled 'chai' shops as I wandered around the antique alleys.
Just outside the market was the caravanserai. This was a treasure! It was fully intact and preserved, but even better, each little room (about 60 in all) was filled with archaeological finds, exclusively stone and tile. There were Greek, Roman, Byzantine, and Ottoman architectural fragments, gravestones, statues, and who knows what else. It was free and I was the only person there for the whole time I spent poking around and sketching. But don't imagine this was some kind of modern museum. Most of the rooms were unlighted, and nothing was labelled. It was really something between a museum and a warehouse, and I liked it like that.
Then I found the art gallery, not 15 minutes walk away. It was an extremely beautiful and well preserved Ottoman bath with 4 main rooms, discreetly plastered inside so that interesting structural and decorative brickwork remained exposed. It was a wonderful environment displaying a small assortment of modern Yugoslavian paintings. 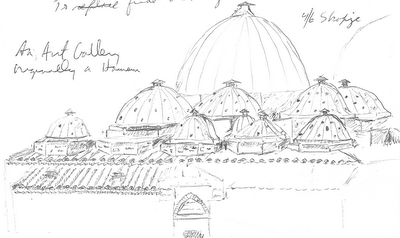 Posted by Unknown at 5:43 PM No comments:

Ottoman Beachcomber, Travels in the Balkans and Turkey, 1983.
The world was a very different place in 1983, at least in Yugoslavia, Greece, and Turkey. In Ottoman Beachcomber you will go on travels in a simpler time to places innocent and charming. Join me as I outrun demons that are chasing me, dance in morning dew with unknown women, walk across borders in the dead of night, find my estranged wife in a 15th century Ottoman marketplace, and explore delightful villages far off the beaten trail.
Here's the cover of the book:

Posted by Unknown at 3:04 PM No comments:

While working on xhtml and css coding, and latest excursions in the Atternen Jewz Talen, my screen slideshow-background made me stop and sigh...

These, 3 of my favorite pics, of Nancy Naomi and her boys:

2 new ebooks of my writings

I have been working with a cloud-software package called Vook, now in beta (and very nice to use) to produce two short ebooks (about 30 pages each).

The first is the opening scenes of The Atternen Jewz Talen, Era 1. The text is presented in both stevespell and normspell, stanza by stanza. Also, each stanza is followed by an embedded audio file, giving a reading of the stanza. If you hear it as you read along, I think you'll be amazed that the text is really quite accessible, in spite of appearances. 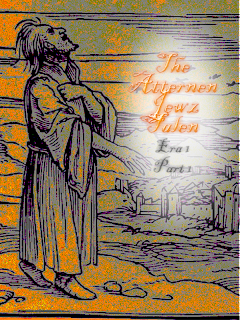 The second book is A Pilgrimmage Tu Jerusalem, Fragment of a letter from a pilgrim tu his rebbe. This is an amazing text I discovered many years ago. I won't say much about it here, except that it's a letter I found, and compared to my poetry, it's easy reading. Here's the cover image from the book: 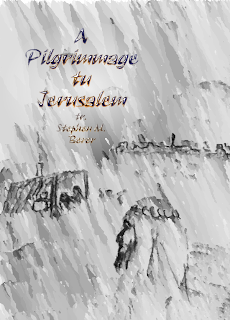 Both books are also liberally, and dare I posit, attractively illustrated. I think they're very beautiful books to look at and to read. We are in the midst of a Gutenberg transition in the nature of books, and while I have heard many people bemoan the demise of the physical book -- its beauty, its art, its texture, its feel and smell -- and while I too am in love with physical books (having written, calligraphed, printed, bound, and conserved them over the years), the ebook is a great new adventure in books and reading. And I hope to keep my own ebooks at the forward edge of the art, rich in ideas, beauty and utility.

Contact me if you'd like an epub version, readable on iPads, Nooks, or with Calibre and other software packages on your computer. My email address is in the right margin of this blog, just below the "About Me" text.
Posted by Unknown at 1:47 PM No comments: