But before I start, for those who are not familiar with Jewish practice, Jews divide the Torah into portions, known in Hebrew as sidrot (singular: sidrah). They are also known as parshiot (singular parashah). The two terms are interchangeable. There are 54 sidrot, and they are read sequentially thru the year, one every week. We begin with the creation story on the holiday of Simchat Torah, and parashah by parashah, complete Deuteronomy one year later.

Let’s begin with a thought experiment.
Imagine you are Moshe (Moses) and God has just instructed you to write the Torah. Naturally, the first thing you do is go to the local stationary store down near Sinai to buy a notebook to start recording things. Once you’ve got your  notebook, what do you do?

If I can give you a little direction on what I’m thinking about here, and naturally, there are other ways to address this problem, but what I’m thinking about is this: what kind of information does Moshe need to write this book? Or, if you prefer, what information did the later writers and editors need? (My question isn’t, ‘who wrote the Book?’ My question is, ‘what information were they interested in reporting?’)  I’m asking you to address the problem of “what are the pieces of this book?” What kinds of texts have been compiled into it? Torah isn’t just laws and mitzvot dictated by God or God’s agents here. It’s a lot more than that. What kinds of documents and oral histories does Moshe need to collect, and where does he get them?
{To the reader; at the end of this drash you can find a partial answer, much of which was compiled in a former drash I wrote on sidrah VaYekhel}

Well, we can see this is a multi-textual document, but I don’t think anyone would argue that Torah is primarily a cookbook or a text on dream interpretation or a map of Canaan and Sinai. What is Torah primarily?
{your thoughts?}
I would call it a marriage contract between us and God, but such a summary doesn’t do justice to the multi-textual nature of the contract.

If we can’t really agree on what Torah PRIMARILY is, can we at least agree on what the most important narrative/story is?
{your thoughts?}

How about this to try to hone in on some DEFINABLE measure of importance: what is the most important narrative based on the number of verses or pages devoted to it in Torah? What do you think that would be?
{your thoughts?}

The building of the Mishkan and the making of all its sacred components gets decidedly more parchment real estate than any of the others. Surprising, eh? Why isn’t this obvious, and common knowledge?

Part of the reason is that the human mind is a narrative-creating engine. It’s what we do; it’s how we think; it’s how we organize and remember. We like stories and we need stories: Adam and Eve, Abraham and the 3 visitors, Eliezer and Laban, Dinah and Shkhem, Joseph in Egypt, Moses and the plagues, the golden calf. The building of the Mishkan, however, is not what we commonly call a narrative. It’s more like one of those indecipherable and aggravating booklets you get with a piece of furniture from Ikea. Or you can think of it as a set of blueprints; or as an art history lesson.

So tell me, why is the most extensive narrative unit in the Torah an art history lesson, and why is it almost always ignored?
{your thoughts?}

Last week everyone sitting in this synagogue agreed that this art history lesson gave clear instructions on how to create the Mishkan and it’s sacred objects. You said the instructions were clear so we didn’t have to worry about process, so that we could dive in and get to work. It was a brilliant interpretation. But, with all due respect, I totally disagree. The instructions are confusing; the materials are often inappropriate for their use; and there is hardly a single description of what the end products actually looked like. We have no idea what the keruvim looked like, or whether the designs in the woven walls looked like an oriental rug, an art deco pattern, a starry sky, a landscape, or a flat field of color, stripes, or polka dots.  Indeed, even Aaron’s robe, with its bells and pomegranates is argued about in the Talmud. Do the bells and pomegranates alternate around the fringe, or do they hang together as a unit. And we hear Moshe complain in frustration, “show me the candelabra; Your description is incomprehensible!”

All we have is an incomplete blueprint; a set of vague instructions. And we NEVER hear what the Mishkan ultimately looked like. Dare I suggest that THAT wasn’t what the authors (or the Author) was concerned with. I would postulate that the concern was not about end products, but to inspire a people to go out and build; go out and create; go out and take a chance and see what happens! That’s the direct opposite of what we commonly think Torah is trying to do. We commonly think it’s trying to direct us, constrain us, set a clear path for us to walk. Here we’re being told: it’s on you. Go figure it out yourselves.

Normally, a drash concludes in such a way that the congregation thinks, ‘aaah, of course, that’s how God wants me to behave’; or, ‘oooh, so that’s the meaning of that indecipherable word or that grammatically strange construction’; or, ‘hmmm, so that’s why bad things happen to good people’. Etc. Well, I don’t have a nice wrap-up to this drash. It’s more like one of those really aggravating TV shows that ends with the 3 contemptible words, “to be continued”. I’m much less concerned with having you come to neat, clear conclusions than in having you realize that this section, so often introduced as being boring, perhaps isn’t so boring, especially if you’re an artist, an art historian, or someone who values arts and crafts. Or someone who values creativity in general.

I urge you to re-read this series of sidrot with an understanding that this is perhaps as crucial and valuable a section of Torah as the giving of laws, or the telling of remarkable sagas, or the careful execution of sacred rituals. I want you to think about these parshiot and elevate them to their actual importance, an importance that the Torah makes clear by devoting so much time to them. This is not just some instruction manual from Ikea, l’havdil. Creative endeavors are one of the most essential defining features of being human, and not just being human, but being a spiritually and morally elevated human being. Creative endeavors are perhaps the most direct route from earth to God, from Babylon to Jerusalem, from our common, selfish, morally ambiguous state to a place of compassion, openness, and wisdom.

Some answers to Question 1, above:

From my drash on VaYakhel:
I believe Torah was consciously composed as a multi-document text.  It was not intended to have the traditional kind of singularity of perspective and subject found in most other sacred or literary texts. Torah was revolutionary in this way, along with its other revolutionary features:
1. its understanding of God's unity,
2. its ethical code that shattered all cultural norms of the day;
3. its establishment of a whole people as a priesthood;  and
4. its conception of history as having a direction and a purpose.
Torah casts its net over every detail of life and brings it into the sacred realm. Aside from encyclopedias, the only other document that I'm aware of with equal breadth, is... the Talmud, a worthy successor in the Jewish canon.

Posted by Unknown at 4:56 PM No comments:

Progress has been slow on this amulet for my granddaughter Maddy. No excuses. I'm the problem. Anyway, the gold is now done, except for some judicious cleaning, especially around Adonai, altho I will leave some errant fragments as little stars in the sky. Here are 4 images. Enjoy! 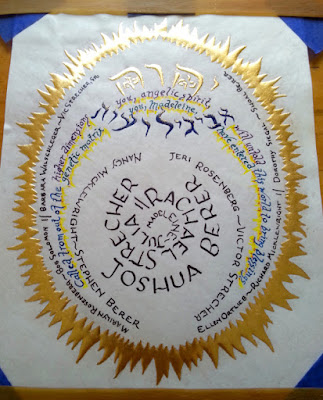 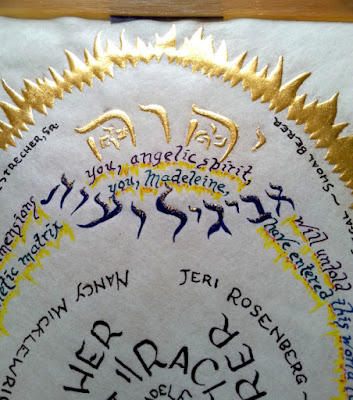 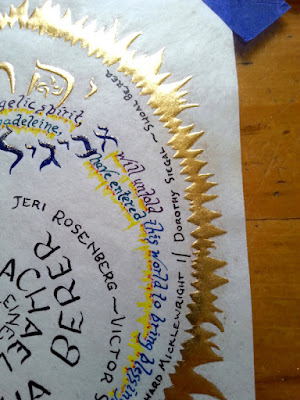 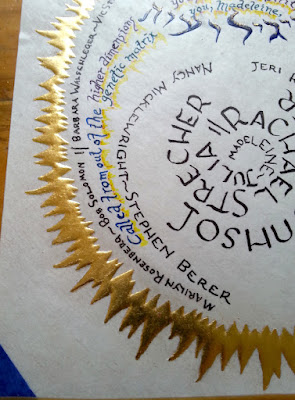